Madonnas and whores and white racial innocence: An examination of ONCE UPON A TIME IN . . . HOLLYWOOD (Quentin Tarantino, 2019) 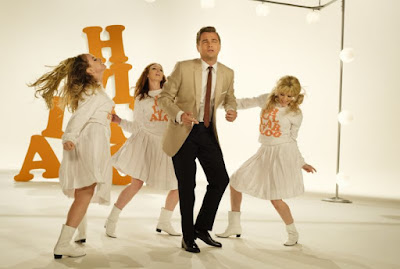 
I. Prolegomenon: “Once upon a time,” Conservatism, and the Appeal of Nostalgia

This isn’t a review. It isn’t a judgment about whether a film is good or bad at a filmmaking level. Rather, it’s an attempt at a primarily thematic analysis. It’s an effort to answer some questions I have.

I want to consider Quentin Tarantino’s Once Upon a Time in . . . Hollywood on two levels: 1) a thematic one, specifically focusing on its construction of, assumptions about, and implications about gender and race — though, as a white person, I am more uneasy about tackling this one, aware that my own complicity in whiteness will always cloud how I observe and understand race on screen — and 2) an emotional one, arguably difficult, subjective territory, but one I think I have to address, given my own overwhelming fury upon exiting the cinema after my first viewing of the film.

First, then: what is the film saying or implying about gender? About men and about women? I believe Once Upon a Time in . . . Hollywood is, in essence, a conservative film. (And I credit my friend Ben Hynes for using this adjective in reference to the film in a conversation with me and thus, as aptly chosen words often do, doing much to illuminate and organize the clutter of details in the film I’d observed.) And by “conservative” I mean two things: first, a conservative stance is one that is, inevitably, backward looking. It looks to the past as a guide for the future and understands or uses the past to measure the present, which generally fails to measure up. A conservative viewpoint on some level idolizes the past — better days, better times, the good old days. It is inherently nostalgic. Second, the film is conservative in the sense that it not only looks to the past with longing, but it is itself rooted in what I would generally consider (particularly as relative to a “liberal” or “progressive” viewpoint) outdated, regressive understandings of the world and, more fundamentally, of the way the world should be. . . .

The following is a loose transcript of a presentation I gave on Meek’s Cutoff, a film that was part of the Pickford Film Center’s repertory series, West of What?!, that ran from June 2017-May 2018. The presentation included a slideshow; the images below correspond to the slideshow images.

Good afternoon and welcome to the screening of the Kelly Reichardt’s 2010 film, Meek’s Cutoff.

Today’s film is a part of the Pickford’s West of What?! Westerns series, and, so before we begin the film, I’m going to talk for a little while about the film and its place in this series.

The Westerns genre is, of course, a significant part of the American cinematic landscape, and it was, for a certain period, enormously popular.

The Westerns genre, though, contained some troubling ideas or myths that are important to recognize.

One of the most interesting things about Westerns is that the popularity of the genre might have a lot more to do with how many Americans tend to see and explain themselves (Looking at Movies, Barsam and Monahan), rather than with a connection to historical accuracy or to the true, often troubling, complexity of our country’s checkered history.

Reichardt’s film might even be conceived as a sort of answer to some of the most troubling myths of the Westerns genre, but it is also, itself, unmistakably, a Western. . . .

In Alfred Hitchcock’s 1960 film, Psycho, a past-haunted man cannot escape himself or the violence he has known and inflicted, and he preserves his own guilt and trauma, literally, in the body of his mother. He could not bear to live with her and the man she called her husband, and so he killed her. He could not bear to live without her, and so he keeps her, tucked in her bed, a “boy’s best friend.” It’s an impossible, stunted existence, an embalmed life, where the dead cannot be buried, and it is a life that splits Norman Bates’s identity in two. His body becomes a sort of prison, a site of ever-present struggle between two selves, between life and death, past and present. “We scratch and we claw,” Norman says, “but only at the air, only at each other, and for all of it, we never budge an inch.”

Lynne Ramsay’s newest film, You Were Never Really Here, beautifully recalls this earlier cinematic classic both overtly and obliquely. Joe (Joaquin Phoenix) is a war veteran, a sort of walking dead man like Norman Bates. Joe carries the suffocating horror of his past around in his scarred body while violent images of that past crash, unbidden, into his mind, disrupting his path in any given moment. The voices of the dead, too, and of his younger self force themselves into his ears. His is a divided existence, and his body contains a mind that won’t obey him. “What am I doing?” he mutters to himself when one of these images or voices shatters his attention and a task at hand. He is often, then, cut off from the world around him, the trauma of his mind wrenching him towards itself and away from an exterior, Other reality.

While Ramsay gives us stark, brutal reminders, often in close-up, of the solidity of Joe’s body, a body that has suffered or is suffering, Joe is, still, a faltering being, a kind of traveler who can’t find a home. His very image flickers in front of us as vehicles rush past in the foreground of the frame and we strain to see him in the background, beyond the rush of street traffic. And even the thin sound of shrieking train wheels and the low rumblings of the cars on a highway which fill the world of the city in which Joe walks are sounds that seem extensions of the constant clamoring in Joe’s mind. Ramsay, as she has done previously, particularly in We Need to Talk About Kevin, fills the world of the film with images and sounds that constantly challenge our sense of reality; we question, at turns, what we see and hear since our protagonist’s traumatized, fractured mind shapes the story. Other damaged and waiting travelers slide in and out of the frame of Joe’s world; they are perhaps the only kind of world he can see through the lens of his experience: figures seated with patiently impassive faces at a station, a sleeping man in a hotel lobby, the bruised face of a woman by the train, a blank-faced woman lifelessly draped across chairs at the airport. . . . 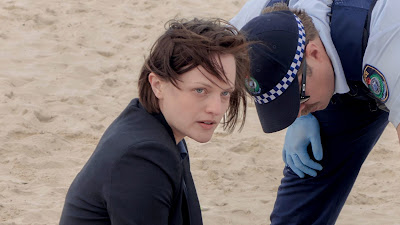 Jane Campion’s most recent project, Top of the Lake: China Girl, a follow-up to Top of the Lake (2013), is a 6-hour, episodic journey that premiered, variously, at Cannes, on the Sundance channel, and, played, most recently, at the Vancouver Film International Festival. It is, as its length and as its screening venues suggest, difficult to pin neatly into a category. Is it a gorgeously shot TV show? A very long film? Campion and her work, as usual, resist tidy classifications of all sorts.

Does her work represent “female annihilation in bonnets,” as BBC Radio 5 film critic Mark Kermode once suggested, or is she definitely a feminist director, her work “emphasiz[ing] and almost perverse figuration of female strength” as Professor of Film Studies at University of East Anglia, Yvonne Trasker has said? Campion herself has championed women and women filmmakers, quoted as saying in an 1993 Cahiers du Cinema piece, “I think I know things about women that men cannot express.” And yet she “bridles” Virginia Wright Wexman notes in Jane Campion: Interviews, “at being narrowly identified as a feminist filmmaker,” and Wexman cites Campion as saying, “‘I think it’s quite clear in my work that my orientation isn’t political or doesn’t come out of modern politics.’”

Ultimately, it’s Campion’s work’s resistance to all kinds of categories, feminist and otherwise, that thrills me most. She does feature vibrant, strongly characterized women and female relationships in all of her films – sisters, mothers, daughters, friends – but her women are messy, often complicit in their own oppression, often loving men that oppress them. She often, too, defines, examines, and explores the patriarchal structures that surround her female characters, exposing those structures as destructive and abusive, and yet her men are messy, too, rarely simply openly misogynist without also being one some level complex and sympathetic. . . .

Read the rest over at Seattle Screen Scene.
Posted by M. Tamminga (@oneaprilday) at 4:25 PM No comments: 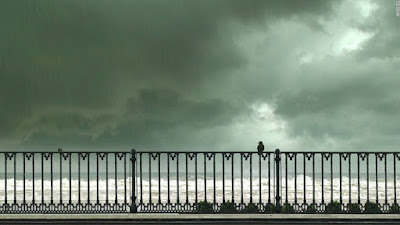 The frame holds me.
Straining to see beyond,
I sleep,
caught between
tension & peace.

An inevitable sort of melancholy hangs over a beloved filmmaker’s last film, and one feels a certain pressure to love it, whatever it is. Going into the screening of the final film of Abbas Kiarostami (1940-2016), 24 Frames, I couldn’t ignore the nostalgia associated with the endeavor. I am not sure, ultimately, if it will ever be possible for me to disassociate the film from the cinema experience of sitting in the dark, grieving a film lover’s grief and thinking, “This 120 minutes will be the last new footage I will ever see.” But sitting there, even so intensely aware of the experience as a memento mori, Kiarostami’s film–flickering relentlessly forward through those precious minutes–took on its own weight. Like all of his films have done for me, it slowly removed me from self-consciousness and immersed me in itself.

24 Frames is certainly unique within Kiarostami’s oeuvre. It’s the sort of thing you might expect to find in an exhibition at the MoMA, where you can study an art piece for a while and then wander away. It’s not the sort of thing you’d expect to sit in the dark and watch for two hours. But then, Kiarostami has always been playing with the idea of cinema, his films so often reflecting back on themselves and on the act of filmmaking, and in these reflections, he has continually made his audiences consider again what cinema is and what it could be. . . .

Read the rest over at Seattle Screen Scene. 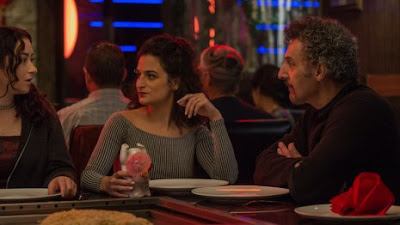 Early in Gillian Robespierre’s new film, Landline, Dana (Jenny Slate), compulsively scratching a poison ivy rash contracted in a not-so-romantic encounter in the woods with her fiancé, sits across a desk from a co-worker discussing their dates from the previous night. Effusively, the co-worker describes a romantic, hours’ long “epic conversation on the rooftop.” Dana, pausing, responds that she and her fiancé, in contrast, had spent “three hours at Blockbuster.” “We got Curly Sue,” she adds. It’s the kind of specific, funny, and evocative moment that punctuates and defines Robespierre’s work, a moment that deftly situates us in the time and space of the film’s 1995 setting, in a character’s emotional landscape, and in the thematic framework. . . .

Read the rest over at Seattle Screen Scene.
Posted by M. Tamminga (@oneaprilday) at 4:17 PM No comments: 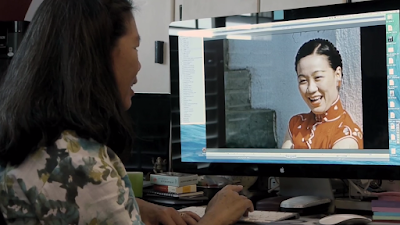 Posted by M. Tamminga (@oneaprilday) at 2:46 PM No comments: