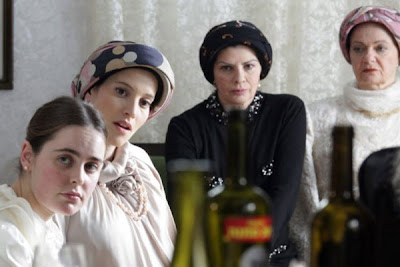 Israeli filmmaker Rama Burshtein sets her debut feature film in a close-knit community of Orthodox Jews in Tel Aviv, though the community is so very closed to outsiders, I wasn't sure for some time which country or city they were in. One gets the feeling they could be anywhere in the world, and for them, nothing would change; they are their own little world, passing through the modern world, interacting with it only when they must - to call an ambulance, for example - but otherwise not thinking of it at all as relative to themselves. If others look at them curiously as they pass through the streets, they do not seem to notice the staring, and if pounding music forces its way in through their windows, they close out the sound without comment. The bubble of their world remains intact.

And I could not help but be, in some measure, attracted to such a community - even if the thought of living among such a group also rather terrifies me: such a closed, tight community has very little room for individual, personal sorrows, joys, or secrets. For personal concerns are not merely personal; they are communal. What concerns the individual concerns the larger community: the wealthy are expected to give freely and generously on Purim to those in need because, one gets the sense, that the wealth, though centered on one family for most of the year, really belongs to the whole community. And the rabbi - aware and concerned for everyone - will give attention not only marriages and deaths but also, with equal seriousness, to the elderly woman who feels helpless because she does not know which oven to buy. We - most of us, at least - are  not used to such a picture of community, much less the experience of such; for us, individuality - the pursuit of our own dreams, our life, liberty, and happiness - is paramount. Certainly, we have ties to friends, spouses, partners, families, but we like to think we have power of individual choice over the circumstances, perhaps even of the familial relations, we find ourselves in. In stark, arresting contrast, the film offers a picture of a group where the community is paramount, where a common theology, and common, unique language, and common religious practices make the community and community concerns more important than the individual - though - and here's where the story resides - the film follows the struggle of an individual within that community, how she must weigh her own desires and feelings - her individuality - in the balance of the communal. And so, while film offers us a sense of the community, the film isn't concerned with an examination or critique of the whole group and its culture and practices; it's simply the context - albeit a vital context - for the particular story we are following, the story of girl, Shira, 18 years old and thus now at a marriageable age.

As the film opens, we see her - with her mother and directed via phone by the matchmaker - shyly and eagerly looking around the market for the man who might potentially be her husband.  Shira's face throughout the film is a delight to watch; she is silent often, but emotions so vibrantly and delicately animate her eyes, her mouth that one feels the dynamic narrative of feeling - confusion, desire, happiness, love, grief - beneath the surface. The others of her community - her father, mother, sister, brother-in-law, the rabbi, her aunt - are older, and we sense they have learned to control much of that facial display of personal emotion; they are more difficult to read - though nonetheless, often all the more, fascinating to study - and their inscrutability stands as an essential contrast to the youth and naivete of Shira. Her face as she sees this potential husband is beautiful, demurely muted but nonetheless alive, illuminated with shy curiousity, eagerness, trepidation, and happiness, and when she later greets her sister, who has come to visit, that face lights up to its fullest and joyous speech pours out. With her sister, she might fully express her youthful eagerness and happiness at the thought of an upcoming marriage.

Grief, however, strikes her and her family, and she is placed in a position in which her youthfulness and naivete must, more quickly than she is ready, give way to adult decisions, adult expressions, adult emotions. 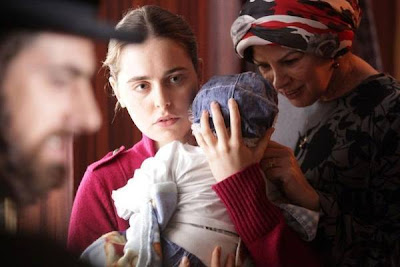 There is no room in the situation for her to be merely blythely young and happy; instead of looking forward to marrying a young husband and growing older by degrees with him, she must grow older all at once, the weight of family cares for this particular community of people suddenly resting on her unready shoulders. The family - and the community as a whole - places certain hopes and expectations on her, often expectations that are conflicting. Her family loves her and wants her to be happy, and yet they have in mind the happiness of the entire community as well. Her mother and father say, "We don't want to push you, Shira," and they don't, not verbally, and yet Shira can well read their hopes for her - and as a daughter who loves her parents and her community those suppressed familial hopes do, indeed, push her. Like an Austen novel - and this film has been to compared to Austen - the plot, set in a very small community and most often within that, in the domestic sphere, centers around whom Shira will marry and how the community respond to her choice. It's a simple plot, then. The execution of the plot, however, is far from simple, and the emotional and situational complexity, as Shira tries to understand herself and her desires, as she tries to navigate among those she loves, as she tries to do the right thing for the good of all, all the while being urged to act of her own volition and choice, drew me further and further into the lives of this group until for me, like them, the outside world was of very little concern; it barely existed.

Burshstein's film will, for me, without doubt be one of my favorite films of 2013, and in addition to the emotional and situational complexity, the cinematography is stunningly beautiful, lighting and framing the characters in such a way that I was not only immersed in the world but bowled over by sheer beauty. The cast, too, one and all, give performances that don't feel like performances - subtly nuanced and deft, one and all.

And last, it is rare that we have the opportunity to see such a closed, religious community, one in which the camera presents them to us so simply: through Burshtein's extraordinarily skillful, delicately shaded storytelling, we absorb their traditions and practices without any outside commentary and judgment, even explanation.

From a feminist perspective, I could possibly complain about the stifling expectations of a community where women's roles are purely, solely domestic; I could protest that Shira and the other young women around her should not have to believe that marriage is the beginning of life; I could grumble at the fact that the men are the leaders and teachers of the community - speaking, singing, and ruling - while the women sit and observe, separate. But I cannot and will not do this.

The community is what it is; we are presented with it in order to participate in its joys and sorrows - not to stand outside and judge - and such is the craft of the film, we do. Its heartbreaks and joys and hopes became mine. Posted by M. Tamminga (@oneaprilday) at 9:56 AM 2 comments: Links to this post