Kieslowski on The Decalogue 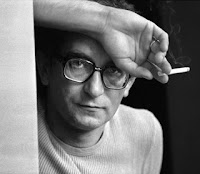 I've just read Krzysztof Kieslowski's introduction to the English language edition of the Decalogue, and I thought it would be worth while to highlight a few of the comments he made that stood out to me.
First, I found it interesting that he was inspired to make the film series when a lawyer friend of his, Krzysztof Piesiewicz, with whom he had written another screenplay, said to him, "Someone should make a film about the Ten Commandments . . . You should do it." A lawyer - dealing in the law every day - dealing with those who break the law every day - makes the suggestion. Of course. And Kieslowski and Piesiewicz went on to write the 10 films together.
Second, Kieslowski's impetus for deciding to actually begin the project is interesting. He writes, "[Poland] had sunk into chaos and disorder; nothing and no one was spared. One could detect a certain tension, a feeling of hopelessness and fear of yet worse to come . . . By this time, I had begun to travel abroad a little and also observed general uncertainty in the world at large. I am not thinking about politics here, but of normal, everyday life. Behind every polite smile I detected indifference. I had the overwhelming impression that more and more I was seeing people who didn’t really have a clear idea of why they were living. I came to the conclusion that perhaps Piesiewicz was right, but realized that the task of filming the Ten Commandments would not be an easy one." I find that after I read this, I'm not sure exactly what made sense to him about doing a film series about the commandments. Was it that he felt the commandments would offer some kind of answer to those who had no clear idea of why they were living? Or did it have to do with exploring why they had no clear idea of why they were living in the first place? Did he want to explore the reason for the indifference? Did he want to give people something to shake them from their indifference? I'm fascinated by the fact that Kieslowski's explanation is so indirect.
Third, this comment about the way Kieslowski and Piesiewicz wanted to approach the series seems important for how I will interpret the films: "[Regarding the Commandments] [w]e read everything it was possible to read in libraries; a mass of interpretations of the Commandments, discussions and commentaries on the Bible, both Old and New Testaments. But we decided fairly quickly to dispense with all this. Priest draw upon it every day and we weren’t here to preach. We didn’t want to adopt the tone of those who praise or condemn, handing out a reward here for the doing of Good and a punishment there for the doing of Evil. Rather, we wished to say: ‘We know no more than you. But maybe it is worth investigating the unknown, if only because the very feeling of not knowing is a painful one.’” The points that stand out to me are that a) his films are not intended to be sermons, and b) they are not intended to dispense justice - rewarding good and punishing evil. I take the latter to mean that he doesn't intend to show his characters being rewarded for the good or evil they are doing.
Last, I love his explanation of why he felt he could or should treat the commandments at all: “Did we have a right the deal with a subject of such universal significance, a subject which even for many of those who break the Commandments is something deeply sacred? . . . Our fears subsided when we suddenly realized that all writers, painters, playwrights and film-makers indirectly deal with themes which are central to the Commandments – they had done so in the past and would no doubt continue to do so in the future. Doesn’t Shakespeare’s Richard III covet something which is not rightfully his? The Karamozov brothers had few good reasons for honoring their father, and Raskolnikov had none at all for killing the old woman. . . . It effects all those who describe a life, a mood or a frame of mind, and we were simply taking our places in the queue.” It's so true, I think. Any artist who deals with humanity in one way or another touches on a human being who is related in some way to one of the commandments. I don't think it's possible to find a novel or a play that doesn't not involve a human being whose decisions and actions are relative to the commandments.
Posted by M. Tamminga (@oneaprilday) at 9:16 PM