The following is a loose transcript of a presentation I gave on Meek’s Cutoff, a film that was part of the Pickford Film Center’s repertory series, West of What?!, that ran from June 2017-May 2018. The presentation included a slideshow; the images below correspond to the slideshow images. 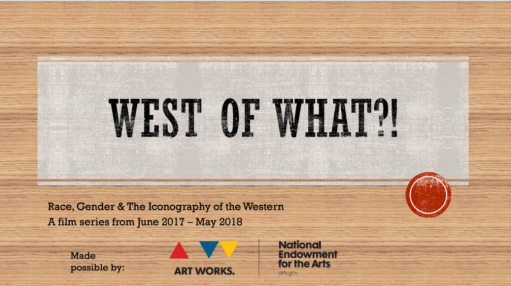 Good afternoon and welcome to the screening of the Kelly Reichardt’s 2010 film, Meek’s Cutoff.

Today’s film is a part of the Pickford’s West of What?! Westerns series, and, so before we begin the film, I’m going to talk for a little while about the film and its place in this series.

The Westerns genre is, of course, a significant part of the American cinematic landscape, and it was, for a certain period, enormously popular. 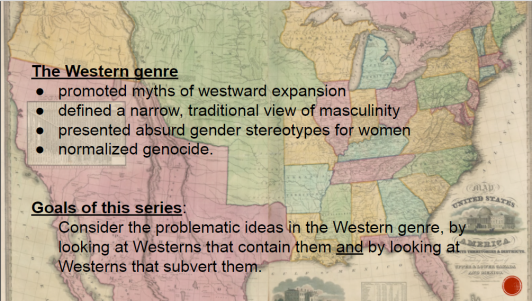 The Westerns genre, though, contained some troubling ideas or myths that are important to recognize.

One of the most interesting things about Westerns is that the popularity of the genre might have a lot more to do with how many Americans tend to see and explain themselves (Looking at Movies, Barsam and Monahan), rather than with a connection to historical accuracy or to the true, often troubling, complexity of our country’s checkered history. 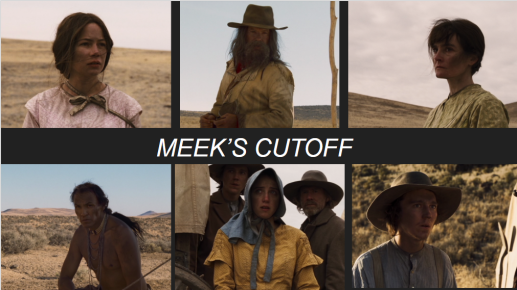 Reichardt’s film might even be conceived as a sort of answer to some of the most troubling myths of the Westerns genre, but it is also, itself, unmistakably, a Western. . . . 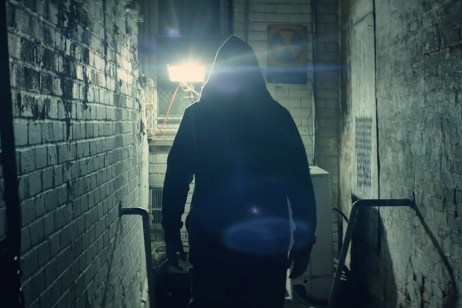 In Alfred Hitchcock’s 1960 film, Psycho, a past-haunted man cannot escape himself or the violence he has known and inflicted, and he preserves his own guilt and trauma, literally, in the body of his mother. He could not bear to live with her and the man she called her husband, and so he killed her. He could not bear to live without her, and so he keeps her, tucked in her bed, a “boy’s best friend.” It’s an impossible, stunted existence, an embalmed life, where the dead cannot be buried, and it is a life that splits Norman Bates’s identity in two. His body becomes a sort of prison, a site of ever-present struggle between two selves, between life and death, past and present. “We scratch and we claw,” Norman says, “but only at the air, only at each other, and for all of it, we never budge an inch.”

Lynne Ramsay’s newest film, You Were Never Really Here, beautifully recalls this earlier cinematic classic both overtly and obliquely. Joe (Joaquin Phoenix) is a war veteran, a sort of walking dead man like Norman Bates. Joe carries the suffocating horror of his past around in his scarred body while violent images of that past crash, unbidden, into his mind, disrupting his path in any given moment. The voices of the dead, too, and of his younger self force themselves into his ears. His is a divided existence, and his body contains a mind that won’t obey him. “What am I doing?” he mutters to himself when one of these images or voices shatters his attention and a task at hand. He is often, then, cut off from the world around him, the trauma of his mind wrenching him towards itself and away from an exterior, Other reality.

While Ramsay gives us stark, brutal reminders, often in close-up, of the solidity of Joe’s body, a body that has suffered or is suffering, Joe is, still, a faltering being, a kind of traveler who can’t find a home. His very image flickers in front of us as vehicles rush past in the foreground of the frame and we strain to see him in the background, beyond the rush of street traffic. And even the thin sound of shrieking train wheels and the low rumblings of the cars on a highway which fill the world of the city in which Joe walks are sounds that seem extensions of the constant clamoring in Joe’s mind. Ramsay, as she has done previously, particularly in We Need to Talk About Kevin, fills the world of the film with images and sounds that constantly challenge our sense of reality; we question, at turns, what we see and hear since our protagonist’s traumatized, fractured mind shapes the story. Other damaged and waiting travelers slide in and out of the frame of Joe’s world; they are perhaps the only kind of world he can see through the lens of his experience: figures seated with patiently impassive faces at a station, a sleeping man in a hotel lobby, the bruised face of a woman by the train, a blank-faced woman lifelessly draped across chairs at the airport. . . .