Space to Breathe: The Secret World of Arrietty (Hiromasa Yonebayashi, 2010) Based on Mary Norton’s classic children’s book The Borrowers and adapted for the screen by the great Hayao Miyazaki, the latest film from Studio Ghibli*, The Secret World of Arrietty, is a delight, offering its viewers a gentle sweetness tinged with the slight ache of melancholy.
After sitting through the energetic trailers for coming children’s films, all advertised as being in 3D and all featuring glossy, computer-generated characters aping for the camera and up to all kinds of hilarity-inducing shenanigans, the first frames of the 2D, beautifully drawn Arrietty came with such a mildness and such a tender, self-effacing beauty that those initial moments were something like stepping out of a car full of excited, screaming children, closing the door on the riot, and walking out onto the grass of a cool-warm spring day – the raucous sounds shut off, and the hum of the bumblebee going about his business and the rustle of leaf on tree enveloping me instead.  Except in this case, in stepping out of the noisy car, my children are quietly with me.  We don’t have to speak to each other – we can be in the stillness together, perhaps stooping to look at a flower or pausing mid-step to let the breeze tickle our faces. Of course, all of my family members do laugh at many of the broad jokes and shenanigans of a Kung Fu Panda or a Megamind, but we also love what Arrietty gives us and perhaps we need it more these days.
A Studio Ghibli film always provides something of an alternative pace and a new perspective, and Arrietty gives no less nourishing a provision.  Those familiar with the source material will know that Arrietty is the only daughter of Pod and Homily and that the three are “borrowers,” little people who live secretly near or in the houses of the big people, the human “beans,” as the borrowers call them.  These borrowers take, or, rather, borrow with dignity, only what they need from the humans and do everything they can to remain unknown, aware that even kindly humans can be terribly dangerous.  The film opens as Arrietty is allowed to go with her father on her first borrowing mission—for tissue and a bit of sugar—and we are introduced to the borrowers’ secretly carried out life business and to Arrietty’s keen curiosity and zest for adventure. The main tension of the film is, of course, not difficult to predict: the borrowers need to remain hidden, but an eager young borrower resists that need, and the question becomes not “Will the borrowers be discovered?” but “What will happen when they are?”  While this tension carries the story ably along, we are, throughout, nonetheless allowed to rest and to breathe deeply in this world; we are given the time to be fully immersed in its beauty and gentle pathos, without being hustled along by a barrage of gags. And my children loved Arrietty’s small adventures: her first trip to the vast kitchen; her practice in scaling a cupboard with fishhook and line; her ginger, then confident, steps across the line of high nails, her encounter with a hungry crow. And my older daughter was particularly taken by the film’s use of sound.  She turned to me at one point, with delighted eyes, saying, “Listen! The clock – it’s how Arrietty hears it.”  And it was.  Small sounds like the soft tick-tocking that the humans hear – or do not hear at all – registered as loud bangs, bongs, rattles, rustles, gurgles, and rushes to the borrowers and by extension to us, viewers and hearers on their journeys with them.
The central tension, the small adventures, the wonderful sounds – all of these things entranced me as much as they did my children, but it was other small but rich elements of the film that have made it even more lastingly resonant for me:


Arrietty’s father, a taciturn but clearly kind and loving man, who bears the burden of a sorrow, of a history, or perhaps of an uneasy future, a burden that is never fully told; the human boy of the house, who labors too much for breath when he runs and who yearns, but never explicitly so, for his absent parents; and the last moments of the film that aren’t quite a happily ever after.


These things, so full of quiet pathos, flow as an undercurrent to the gentle rhythm of the story and leave me in thoughtfulness.
There is not in this film the neat tidiness, where loose ends are tucked away, where all sadness is banished forever.  The borrowers’ lives will not be substantially different; they are borrowers, and they will always have to scrabble in some way for their subsistence, their little, precious existence, never quite free from fear of the big people.
The film, to be sure, did not make my children sad in the least; their lighted faces and happy skips out of the cinema would deny that, but its story, while a magical fiction about little people, strikes a true chord like the best fairy tales do, reflecting back to me a something that is the real beauty, real vibrancy, and real pain of life. 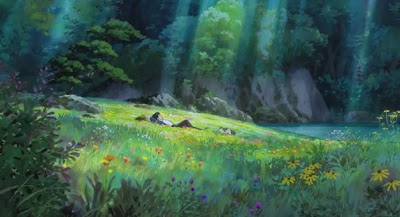 *Studio Ghibli is the Japanese studio of such marvelous films as My Neighbor Totoro, Castle in the Sky, Spirited Away, Howl’s Moving Castle, Princess Mononoke, and Ponyo, and others.
Posted by M. Tamminga (@oneaprilday) at 10:23 PM